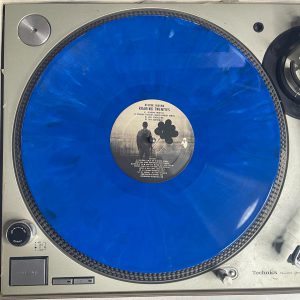 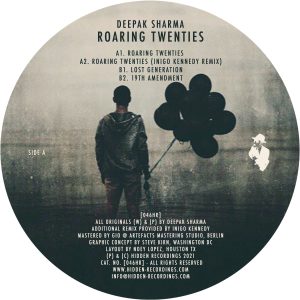 The Roaring Twenties is hopeful time for peace, a burgeoning economy, with progressive rights for all.  A humble group of artists continues to create, share and evolve.

Side A begins with Roaring Twenties, its looping and hypnotic design will catch dancers immediately as they feel it through unyielding, timely percussive changes.  Techno dignitary Inigo Kennedy offers an organic, stripped down and forceful remix that will push dancers through the night.

Side B begins with Lost Generation, its capacious feeling of clutching groove, polyrhythms and texture will instantly grip dancers.  19th Amendment is a juggernaut of strength and power.  It’s groove intensifies as sinister percussion flows.

DJ, Producer and Curator of Hidden, Deepak Sharma has been entrenched within techno for over a decade. Tough, raw and gritty describe the man, his music and label.

Perseverance is another word synonymous with Deepak Sharma: an unrelenting passion for music and sharing his sound through a belief so intense, his soul pours out and bears itself within each release and DJ set. Known for a cerebral approach to music, he demonstrates his ethos that DJ’ing is about creating a moment, often through taking crowds on a hypnotic journey and building energy, with a room as one towards a higher peak. While DJ’ing is his calling, his label also requires the utmost care through each carefully curated offering, slowly and steadily building a catalog greater than most accomplishing the rare feat of forty-six releases and counting.

Now, Deepak Sharma is fully engaged as a producer, bursting at the seams with an active imagination, over-flowing with ideas and constantly learning, leading to an ambitious release schedule in the future.

News on this artist